A while back we presented a review of different "Pi-Alikes". Computers similar to the RaspberryPi - low cost and low power. The question we set out to answer was "what exactly does 'low power' mean?" Turns out that for the most part low power was exactly that—low energy consumption and low computational power too. The RaspberryPi and its contemporaries won't break any records but they won't break the bank either.

Enter the Cubieboard2. We mentioned that this had been announced and we finally got our hands on one: 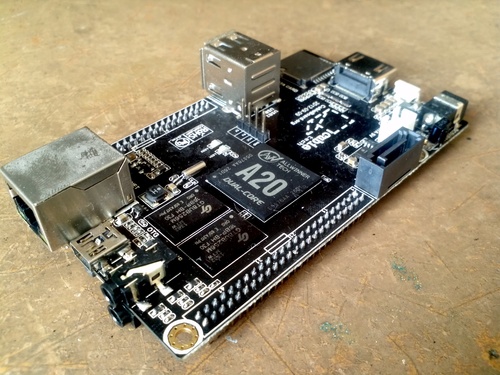 Hardware wise, the Cubieboard2 is pretty much identical to the original except for its A20 dual-core chip and double the RAM (1 GB). There's the same ethernet, HDMI, SATA, etc. Instead of Android 4.0.4 it ships with 4.2.2.

Despite the similarities, the first rule of Cubieboard2 is that it is not Cubieboard1. Which means that as much as one might want to use the Cubieboard image, a new SD card image needs to be written. They exist, but were somewhat harder to find than they were for the original Cubieboard. The Sunxi Wiki isn't well updated for the Cubieboard2, so I resorted to Google and found this. In retrospect I should have just started on the Cubieboard pages and followed the nice big download link.

Booting up you see the nice two penguins in the framebuffer that indicate two CPUs. And then nothing, for quite a long time while the system boots. That was very disconcerting and I was almost sure something was wrong. With the dual core CPU you'd expect things to feel faster, but it's hard to tell. Starting was disconcerting without any output. Starting Chromium was slow, but of course it would be compared to my desktop with an SSD. Part of the slowness is almost certainly the SD card. X11 does feel pretty responsive though, and there's not that much of a slow down when multitasking. That's probably the real benefit of the second core. That and a tasty 1 GB of RAM make this surprisingly powerful for the price and size. 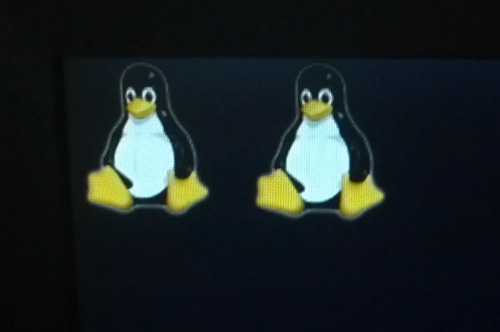 The best concrete way to compare performance is, of course, a benchmark. First though, some stupid bug in something-Google made apt-get nearly impossible to use. see here for a fix. That was annoying and necessary to sort out because otherwise there wouldn't be the necessary software installed to run the benchmarks.

I have to say that I thought the Cubieboard2 performed better, but I was absolutely blown away by some of the benchmark results. Network and disk performance were effectively the same, so we can ignore those. What's really interesting are the CPU benchmarks. First, integer performance. On a core-for-core basis it was about the same as a Cubieboard. This means that overall there's twice the performance when factoring both cores. 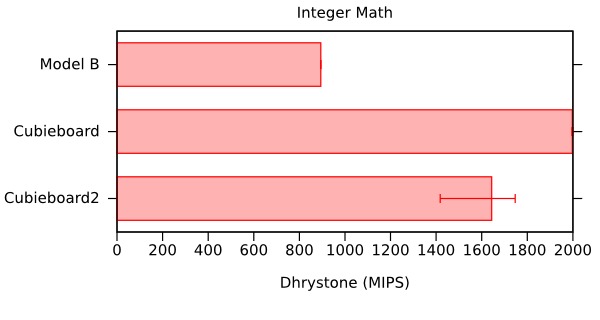 Where the Cubieboard2 really shines though is in the floating point arena. Whatever changes they made between the A10 and A20 CPU, Cubieboard and Cubieboard 2, the two SD card images, it made a huge difference. Results indicate nearly three times the performance. Across both cores that would be six times faster over all. (That's 4x faster than the Pi too!) It's absolutely staggering. 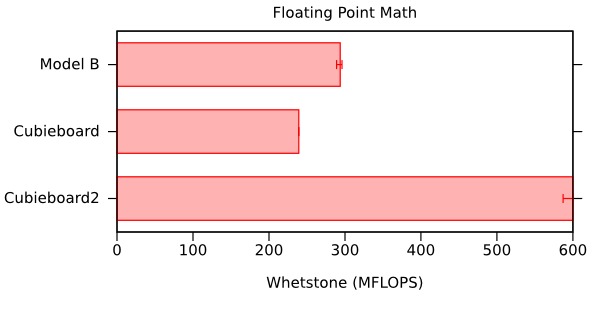 These performance improvements aren't just smoke dust either. There's real world benefit. bzip2 compression ended up performing about the same. Still, that's two times the performance considering both cores. There may be a limiting factor with the SD card here. 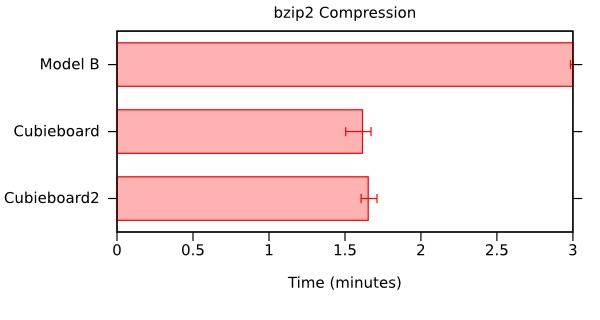 MP3 encoding performance was just fantastic however. Half the time of the Cubieboard and still significantly faster than the Model B. That's effectively four times faster when considering both cores. I do believe that what I thought was faster performance when using the Cubieboard2 is indeed the case. 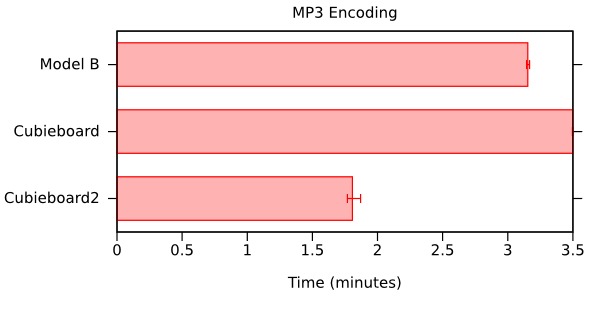 My conclusion? Why would anyone want a Cubieboard anymore? Cubieboard2 all the way. I sincerely look forward to the next hardware revision of the RaspberryPi if they can get the same sort of performance improvements.