A big thanks to Ben Nuttall and everyone who made the Manchester Raspberry Jam this weekend, and happy birthday to Ben and to Paul Beech (who turned 23 again on Saturday).

I learned a lot, and it was great to meet most of the Pi foundation people for the first time.

Two things in particular stood out for me, one about how to work with schools and one about the mobile hot-swap UPS battery gizmo that we've been building (and which I demo'd in various applications at the Jam).

Schools. Several people suggested a Pi roadshow that goes into schools with introductory sessions, one for kids and one for teachers. This seems like a really good idea. Sheffield Computer Science has been running an outreach programme which gave away 50 Pi kits to students from four local schools, and that has generated interest in other local schools who want to dip their toes in the new computing curriculum that's coming along. Unfortunately we've given away all our hardware! So I'll be looking for a way to club together with others in the region who are interested (probably under the auspices of the STEM ambassador programme being run by Linda and Richard and others down the hill at Hallam's Center for Science Education). If this sounds like you, give me a shout!

Mobile power. Both Dave Akerman Eben Upton suggested that we could save battery life for our mobile Pi add-on board by supplying 3.3V to the Pi instead of 5V. There's nothing on the Pi board itself that runs on 5V — the voltage was chosen in order to take advantage of the USB standard and the prevalence of micro-USB chargers. The 5V input is dropped to 3.3V using an LDO linear regulator which effectively throws away some of the power supplied to the Pi (half a watt perhaps), and is "the hottest component on the board" as a result. Dave has had good results supplying 3.3 volts and unsoldering the LDO from the Pi board (he and his collaborator Anthony reported battery life improvements of around 50% using this method). Eben suggested that supplying e.g. 3.35 volts might be enough to overwhelm the LDO, removing the need to unsolder the component. Definitely worth some experimentation!1

So thanks again to Ben, and best of luck with your move to the Pi foundation in Cambridge. Better start working on a moustache, though?

Some pics by Tony Hughes... 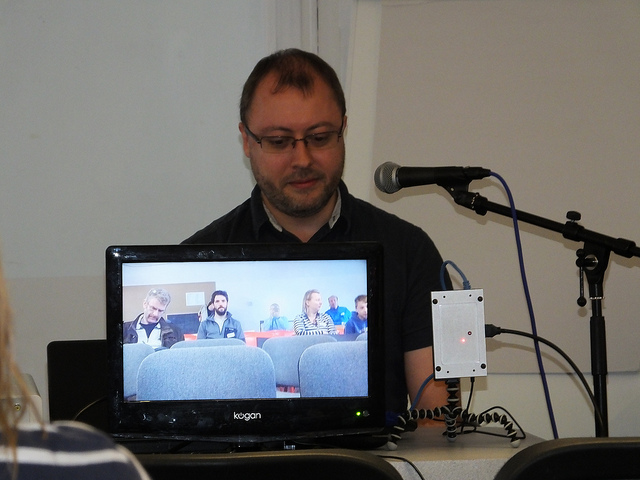 A camera in a lunchbox: 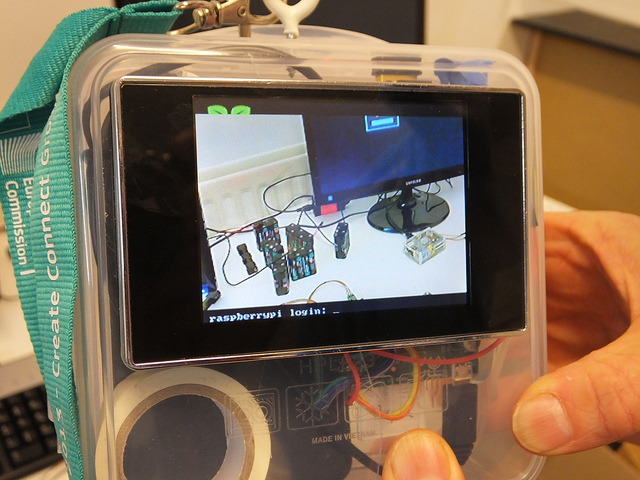 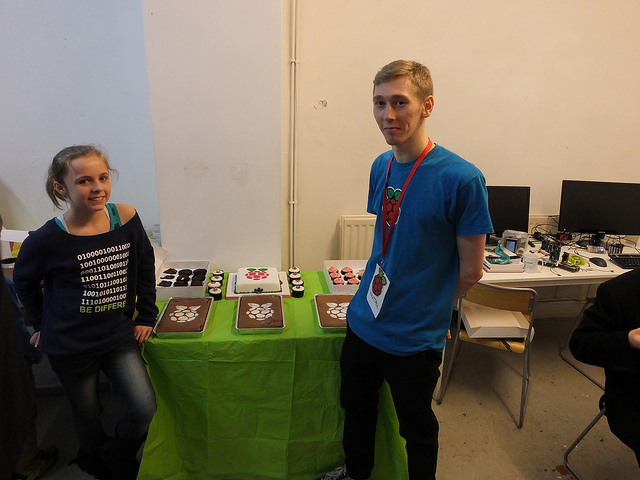 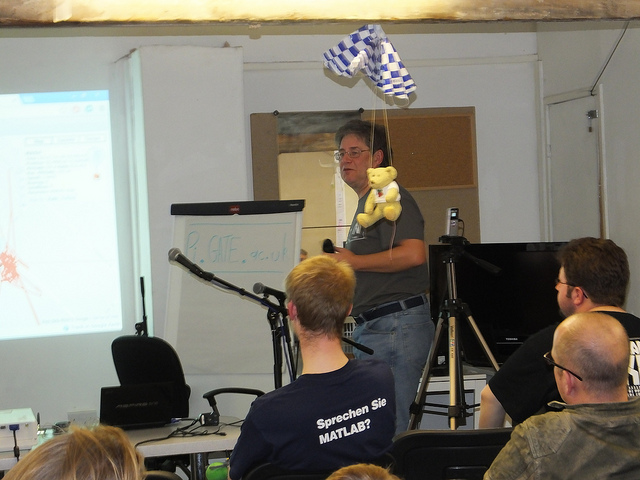 Clive does The Matrix: 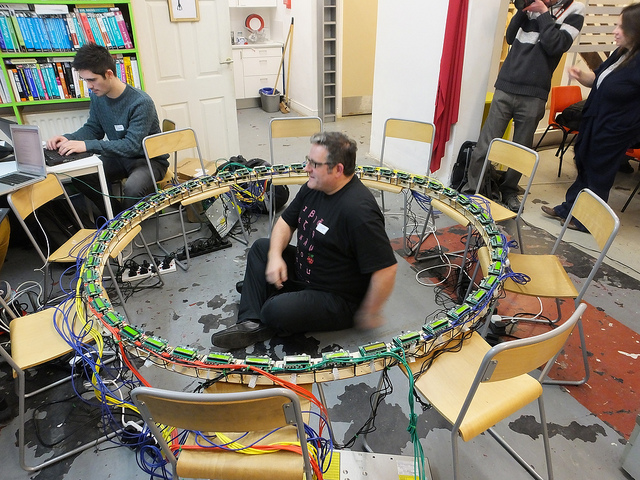 Paul explains how big the one that got away was: 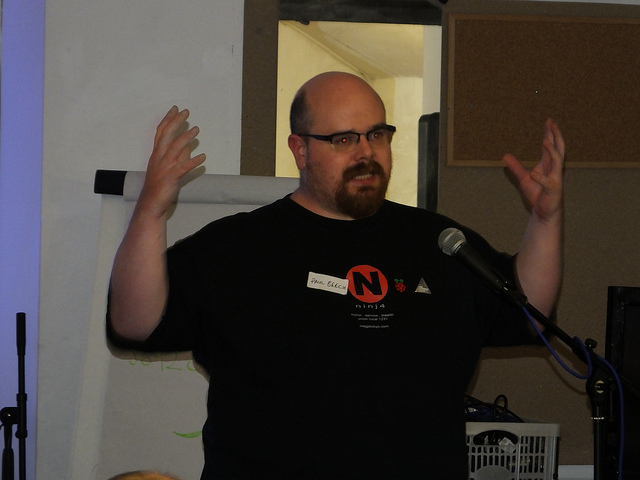 The author thinking he has cunningly hidden his bald patch from the crowd but forgetting about the mirror: 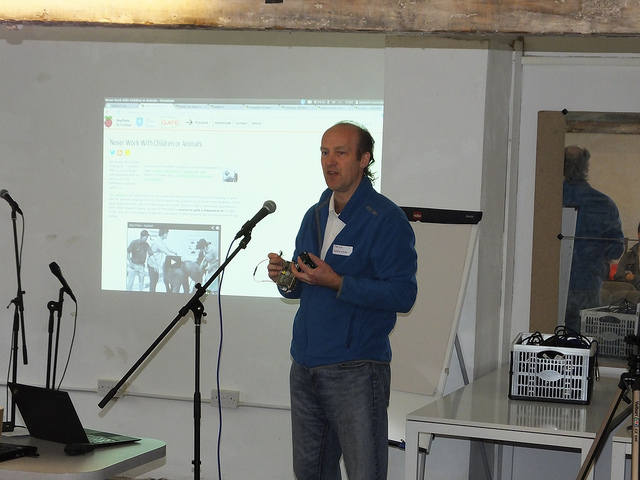 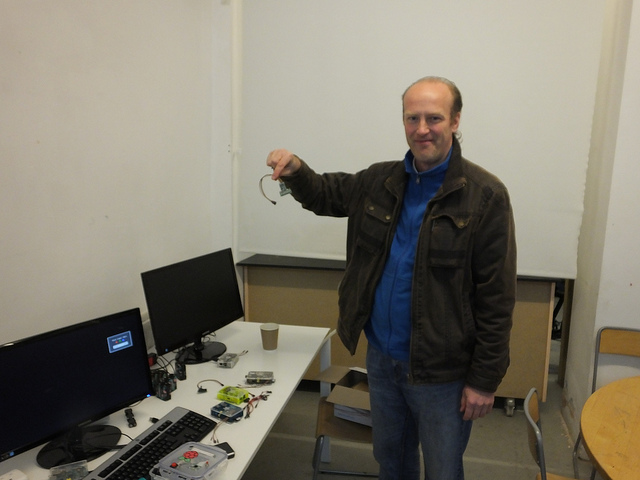