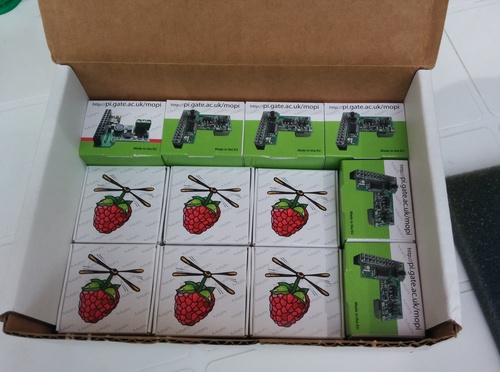 (With apologies to Stevie Smith.)

Ok, so it was raining solidly for the second straight day of our (working) holiday, but what the hell — I was tucked up in bed, and The Little Monster was still asleep at gone 9 local time. Life was fine. And then I tried to sit up, and the world started spinning. Hmmm. Not so fine.

Labyrinthitis is a murky syndrome involving the tiny hairs in your inner ear that allow us to balance. If there's a change in the liquid that activates them, then all sorts of wierd and wonderful things can happen — including vertigo. A frequent result, apparently, is projectile oral expulsion of whatever you've been scoffing recently — see for example Paul Carter's account1 — but lucky for me I didn't go through that stage.

I do feel somewhat wobbly, though, and testing new versions of the MoPi firmware from Lubo has been a bit tricky for the last few days...

All part of life's rich tapestry, no doubt. Onwards.

The good news is that we're pretty convinced that the version 3 prototype is a solid basis for the first full production run (version 4, which we'll be delivering to our Kickstarter backers in May and June). We've ordered the PCBs and most of the components. (Below more details of the development and testing process.)

The bad news is that there's a world-wide shortage of the Silicon Labs microcontroller that we're using2 :-( 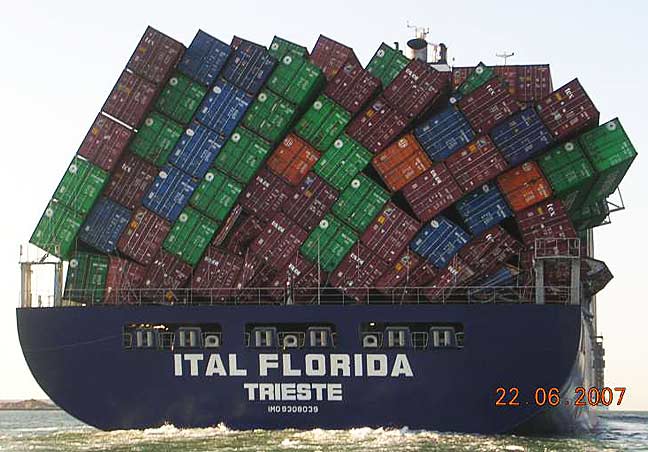 — we've only managed to order around half of what we need for immediate delivery. The other half is on order for delivery in the first week of June. If the situation stays the same then this means we will be delivering to the first half of our backers in May and the second half in June. (We'll do this in first-come-first-served order.)

If anyone has 300 spare controllers we'd love to hear from you...

Big thanks to Georgi Marinov from EngView systems for designing a beautiful packet for MoPi: 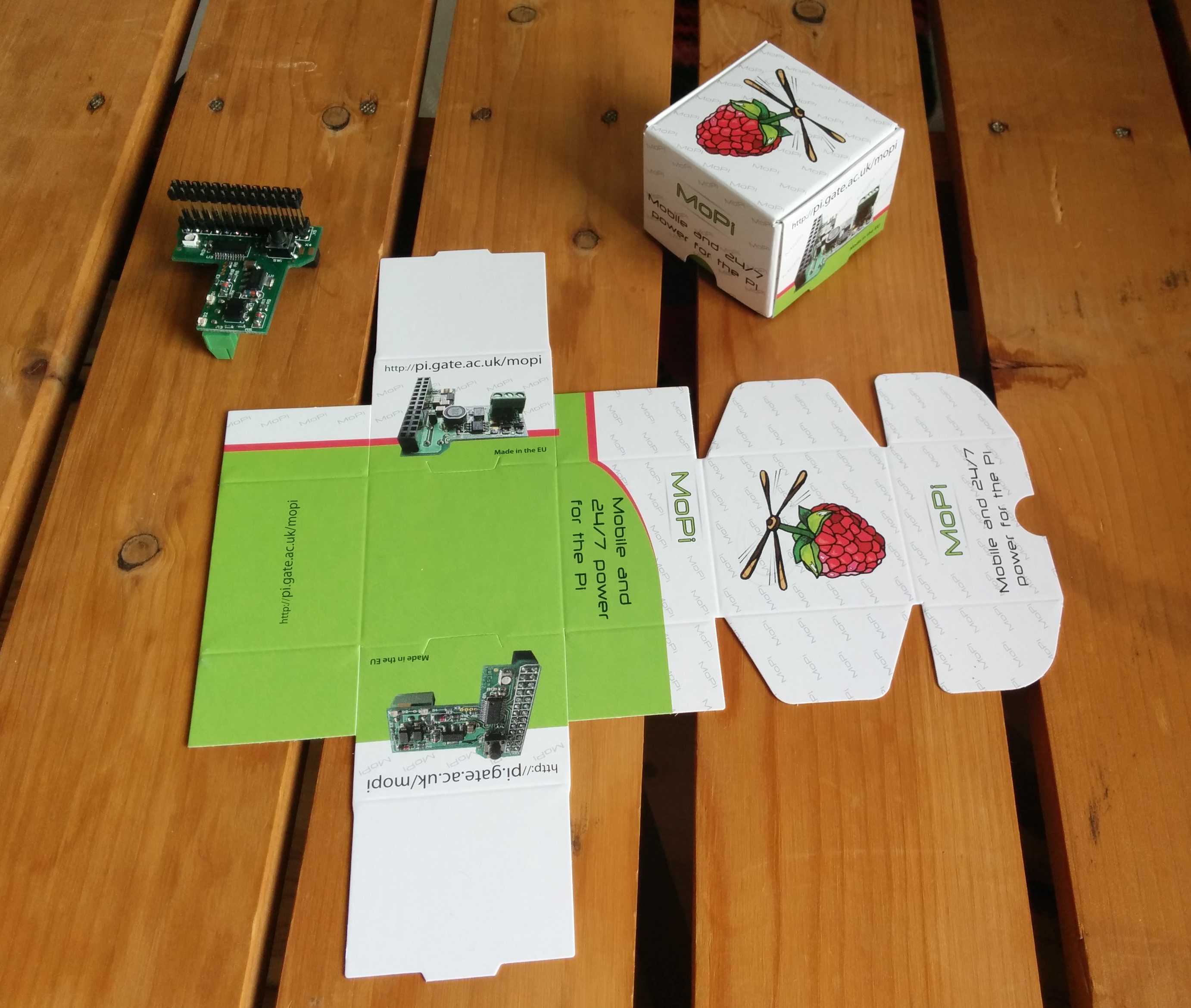 And you can also spot the new stackable headers version here (with a stabilising device at the top which we'll ship it with — the long pins are very easy to bend!). 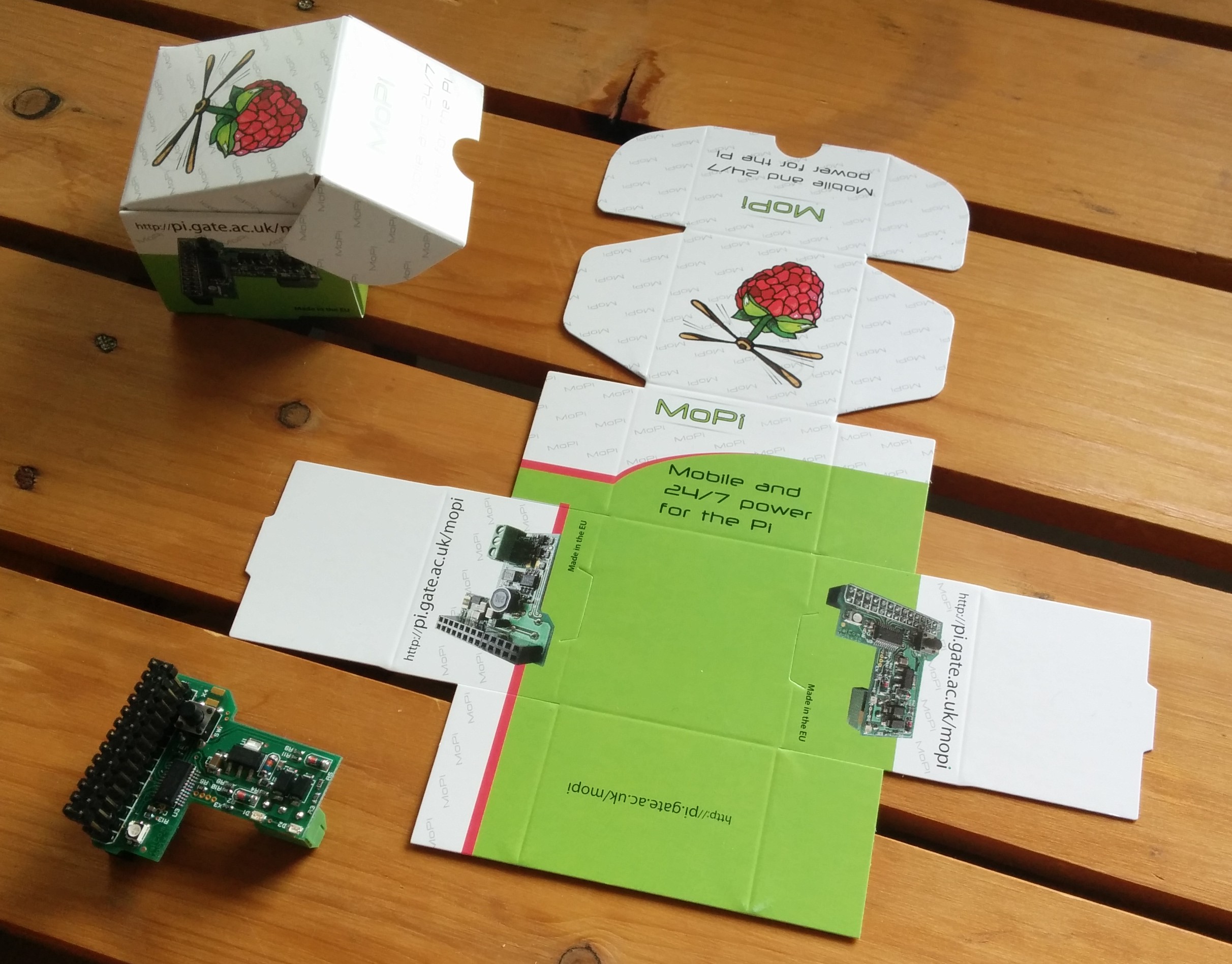 Thanks Joro! (And thanks Gen for the logo!)

4. Working with the New Board

Our present work has several objectives:

We're doing this using external power supplies to make the development cycles faster. (Well, would you want to add "wait for the batteries to discharge" to every edit/compile/test loop?!) I'm writing this post next to a large humming monster: 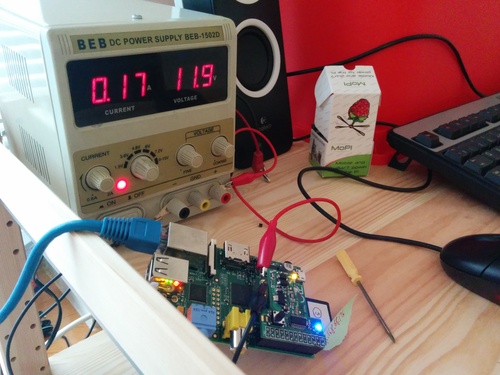 The Pi is drawing 170 mA; MoPi is getting 11.9 volts from the PSU. The PSU connects up to one of MoPi's supply inputs using a couple of re-purposed panel pins: 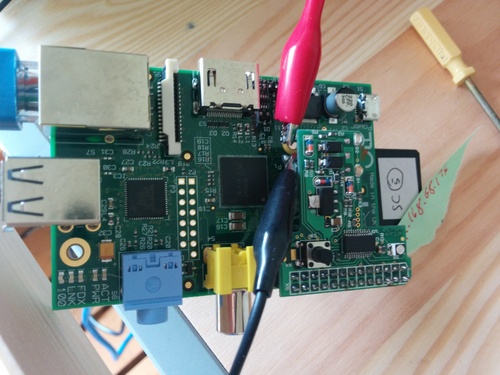 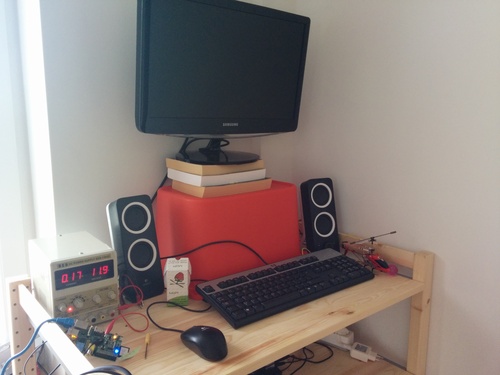 We've also got a flash new PSU down at the workshop: 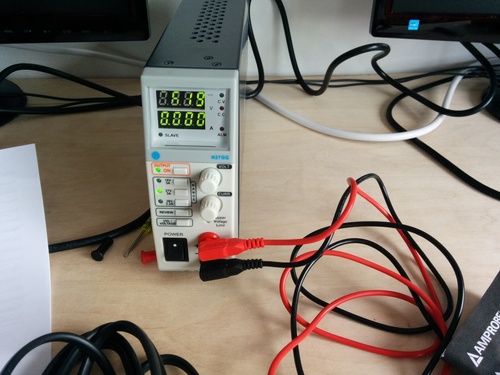 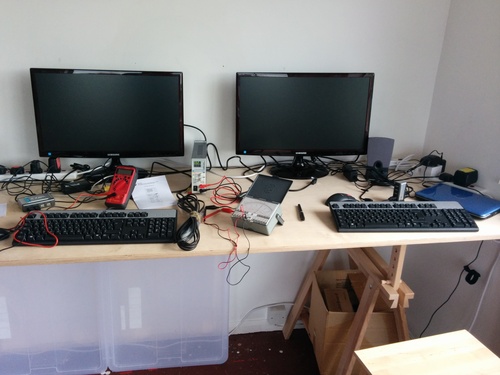 And here's Fred after I just showed him the bill: 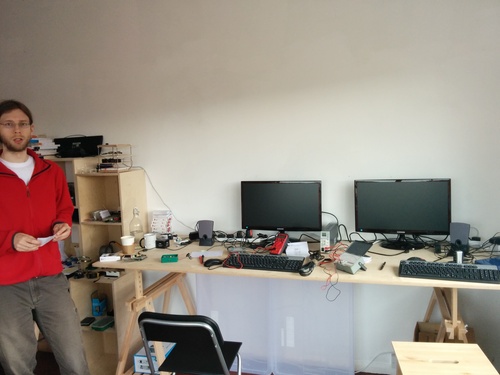 While we're showing my snaps, here's one of my absolute favourite bits of kit ever: 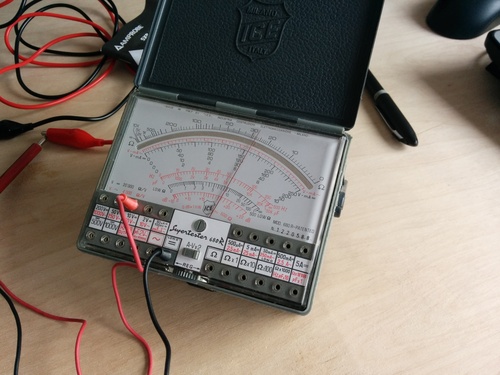 This multimeter has been running reliably for 30 years! Ok, at some point I couldn't get the batteries any more, so I had to bodge up a container for a different size, but apart from that it has been pretty much perfect. I plugged it into our new PSU, dialed up 6.2 volts and hey presto! The meter and the PSU agreed 100%. Can I marry my multimeter?

We've got a new shiney one too, but the romance just isn't there: 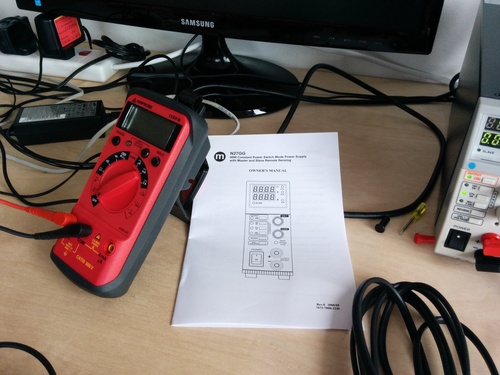 Anyhow, after this work is finished, we will:

Here are the battery rigs waiting to go: 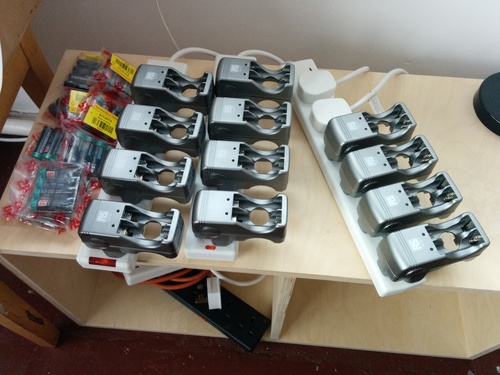 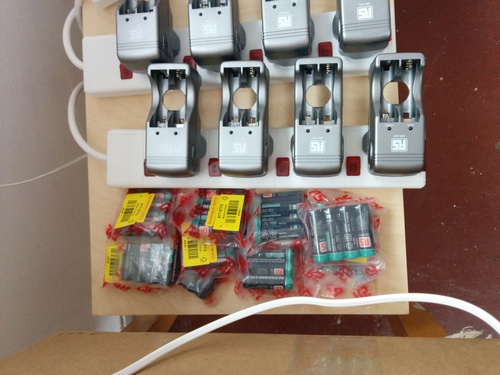 Do say: wow, you're really taking this seriously! Don't say: so, Professor Cunningham, you popped out to buy a battery about a year ago and you haven't actually finished yet?

One of the great things about the Pi is that it runs a free and open source software stack. This makes development so much easier — and here's an example of why...

Now that MoPi uses I2C as its communication mechanism, we have to enable this in the SimBaMon package. Here's how we do it4:

The process of developing our interface involved hacking the i2c-tools package to play with the multi-byte read facility in the i2cdump command. On a closed-source operating system, of course, you would be stymied at this point. On Linux it is super easy :-)

Here's how to pull down the source code, rebuild and test:

Hey presto, I can hack away at the C code and get immediate feedback with commands like sudo tools/i2cdump -y 1 0x0b i (where 0x0b is MoPi's designated I2C address — the smart battery address)5.