This is, we hope, the final pre-production prototype board. It differs quite a lot from the previous prototype (which is the one you may have seen on our Kickstarter page — if you missed it you can sign up for pre-orders here). The success of the crowdfunding campaign allowed us to add a bunch of new features (aka stretch goals). The new board has these new hardware and firmware features:

This post describes some of our work on testing the new board and on updating the SimBaMon software that manages it from the Pi. Then we look at a possible arrangement for adding battery charging to the picture, and finish up with a revised delivery schedule.

Top of the board: 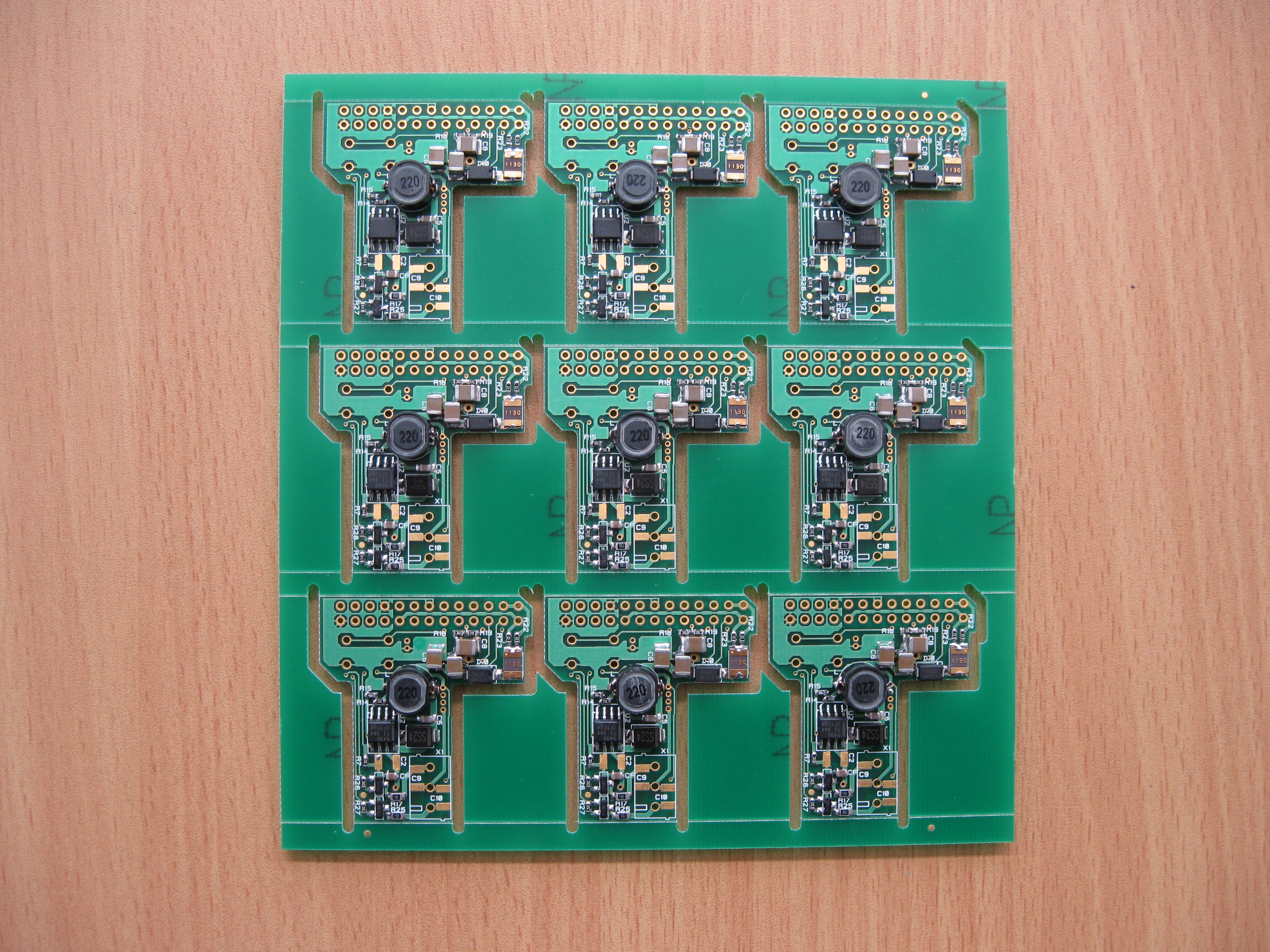 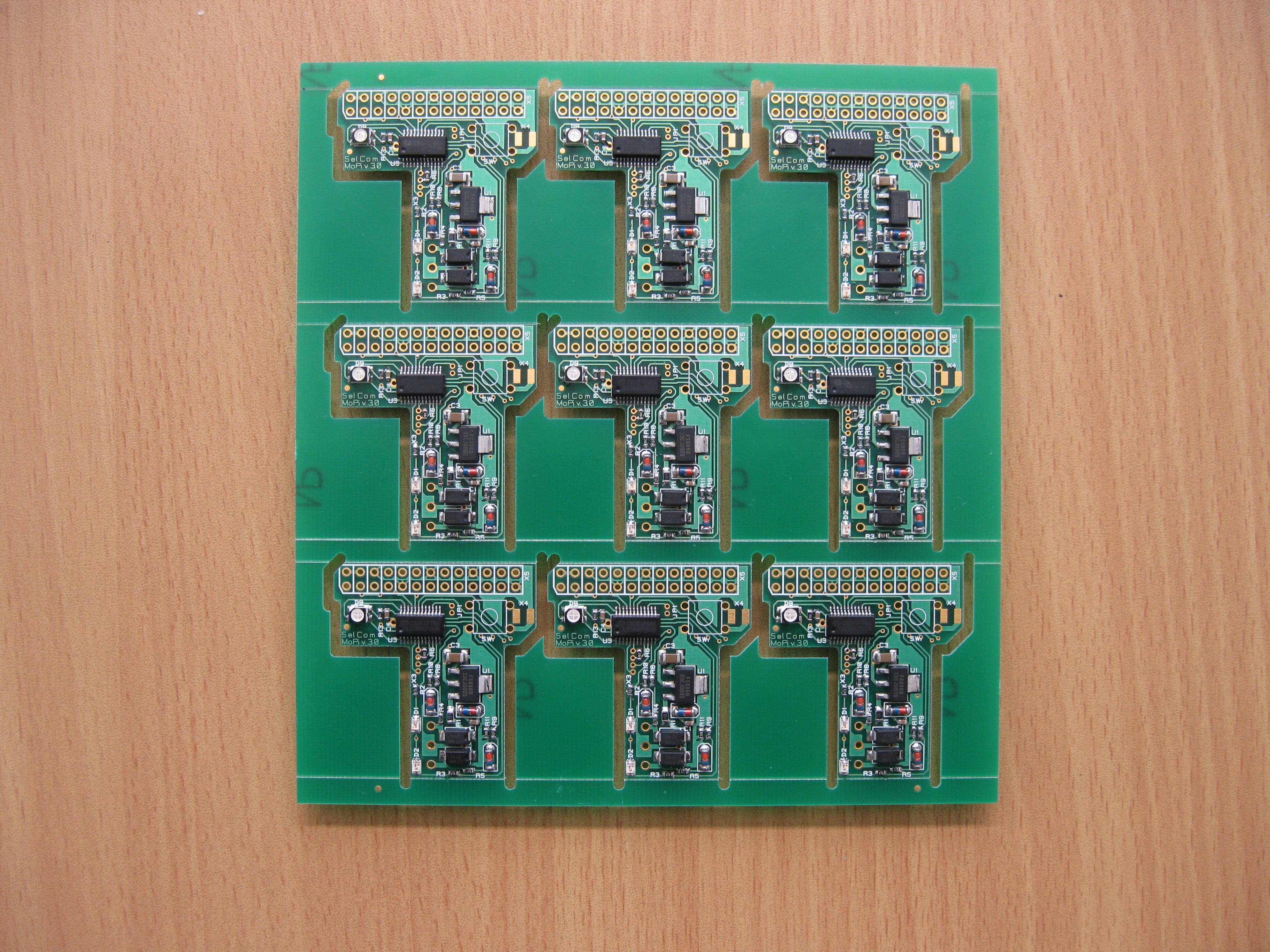 The stackable headers (for when MoPi is used in tandem with other add-on boards) take up quite a lot of vertical space in order to provide a set of pass-through pins above the MoPi board. Therefore we're offering two versions, one with the stackable header and one with a standard low-profile header. (If you're a backer you'll have had a message about filling in a survey form on which one you prefer.)

This is the stackable header that we're using (from Adafruit): If you're opting for the low-profile header you can see an example here, on the level 2 board: 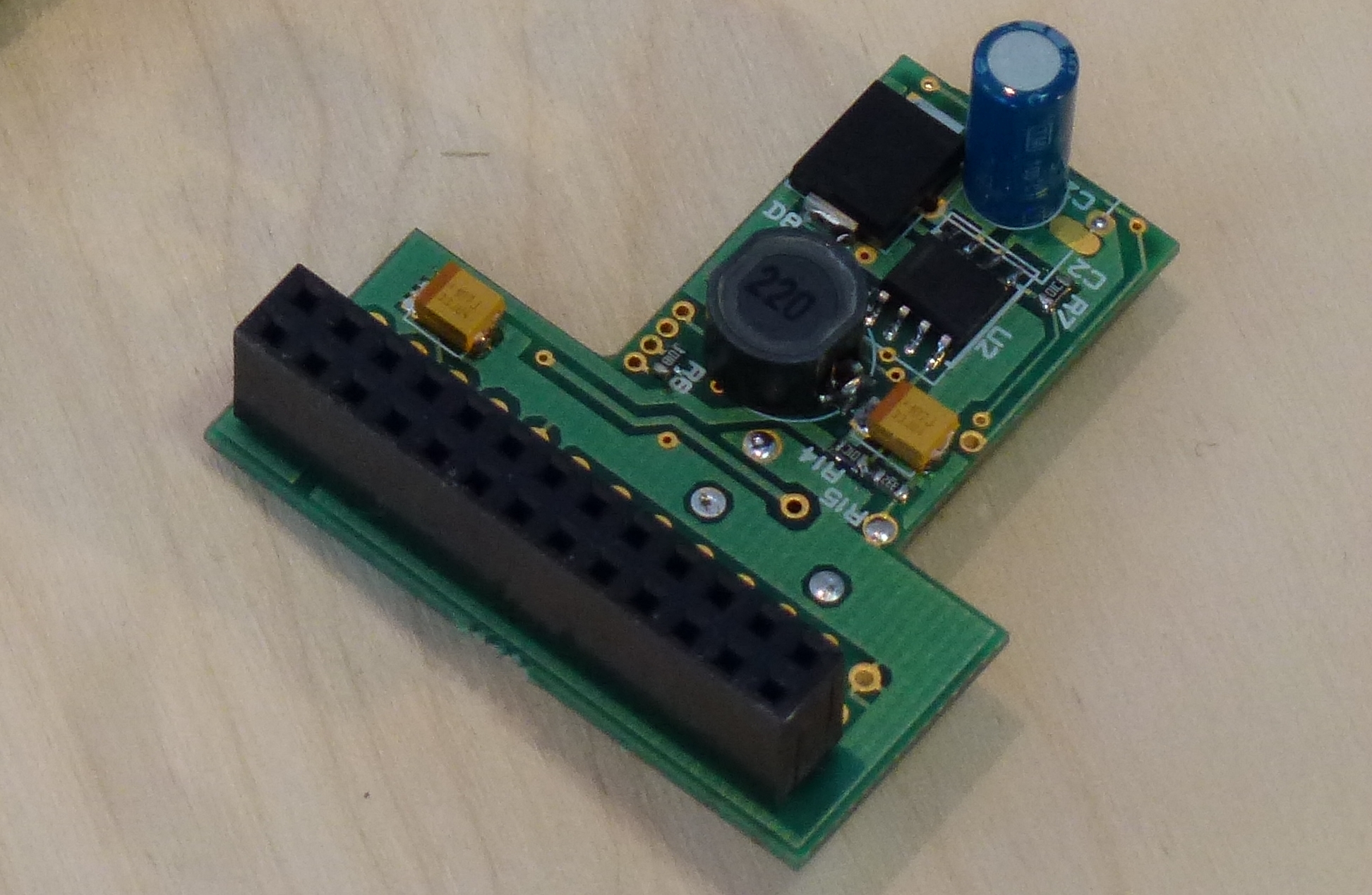 One feature that we didn't manage to get sufficient backing for was battery charging. This feature would be a great addition to MoPi, but it turns out to be pretty difficult :-( In fact, dealing with lots of different chemistries may not be possible at all on a tiny device like MoPi. (Most manufacturers of charging ICs only support one chemistry per chip, for example, and some only support charging a single cell per chip! Many chargers also rely on having a temperature sensor in physical proximity to the batteries themselves.)1 The other challenge is that we've got a really small surface area to work with on the PCB.

Still, a number of our backers want to use MoPi with a charger (e.g. to charge batteries from solar panels during the day and then run on batteries overnight), so we've been working on a configuration with an external charger. For example, here's how we think a UPS configuration with charging could look: 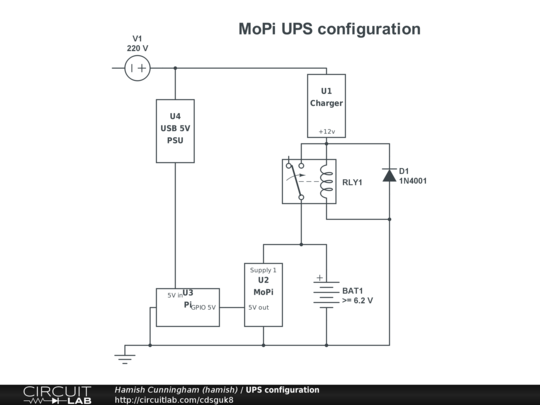 We haven't tested this yet, but it should work ;-)

There are a number of potential gotchas in this type of circuit. For example, when the mains power drops, the Pi must be powered pretty much instantly in order to avoid triggering a reboot. There are no big capacitors on the Pi's PCB to buffer its consumption of 300-500 mA without power. To deal with this requirement we need MoPi to be always on and monitoring the Pi's 5V feed, even when that feed isn't being supplied by MoPi itself. (This doesn't waste much power as our microcontroller is very efficient.) When MoPi sees the 5V rail start to fall the controller immediately enables its 5V stabilizer, taking over supply of power to the Pi.

In the circuit above, when there is mains, the charger is generating e.g. +12V DC and the relay's coil is energized. The contact is switched to the normal open position and is passing +12V to charge the batteries. When mains drops, the relay is switching to the normal closed position and charging will stop. MoPi is powered all the time — and so, we hope, is the Pi. (What does the diode do? When the +12V goes down, accumulated energy in the relay's coil must be dissipated. The diode is shorting the coil to do that. Otherwise the relay's contact will stay closed for a longer time.)

More on this when we get time to test it out in practice.

I love deadlines. I love the whooshing sound they make as they rush past. [Douglas Adams]

Ok, we're a little behind. We launched a week later than the plan (my fault — I didn't allow enough time for the Kickstarter approval process2), and then we ran for a week longer than planned, and then we met our stretch goals for several things that required additional changes to the level 3 prototype board, not to mention orders from suppliers we haven't used before.

This means that we've only now started testing the level 3 board, approximately a month behind the original schedule. We've also got some significant changes to make to the division of responsibilities between the software running on the Pi and the firmware running on the MoPi microcontroller. The latter is extremely important to get right for the production boards, as flashing a new firmware revision requires special hardware.

Our best guess for the delivery of version 4 (for our Kickstarter backers) and then version 5 (for pre-order subscribers and for retail supply) is now as follows.

(To cut a long story short we now plan to start delivering Kickstarter rewards in May. If we hit issues with component supply or that require hardware revision this might slip to June.)